4 Tips for Getting Great Family Stories from Your Family Members 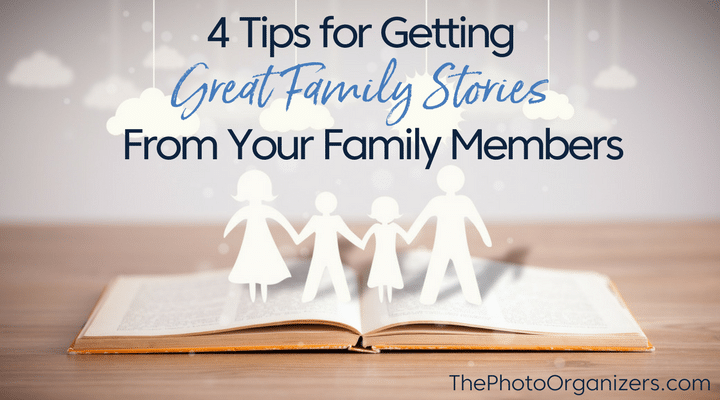 For many professional photo organizers, capturing the stories behind their clients’ photographs is an important part of the process. Whether you are creating a life storybook or a photo album covering many generations of a family, getting your relatives to provide the family stories and memories that accompany their photos can be a bit challenging.

The following tips from BiographyNOW’s lead biographer, Liz McDougall, will help you pull rich, fascinating memories from your family.

Unless you’re a real Chatty Cathy, most of us don’t enjoy talking to someone who doesn’t seem all that interested in what we’re saying. I’ve found that one of the key things that I can do to ensure a successful interview is transmit my genuine interest in what the subject is sharing with me. Beyond laughing at humorous moments and conveying empathy when hardships are mentioned, it’s also very helpful to encourage more of the kind of material you want to hear.

For instance, if a subject tells me a real gem of a story, I’ll follow up with, “Oh—that’s such a sweet memory! That’s exactly the kind of stuff I’m looking for.” Similarly, I gently indicate the kind of material that I don’t want: “I’m sure your son had a lot of interesting experiences at Harvard, but I want to hear about your experiences.” 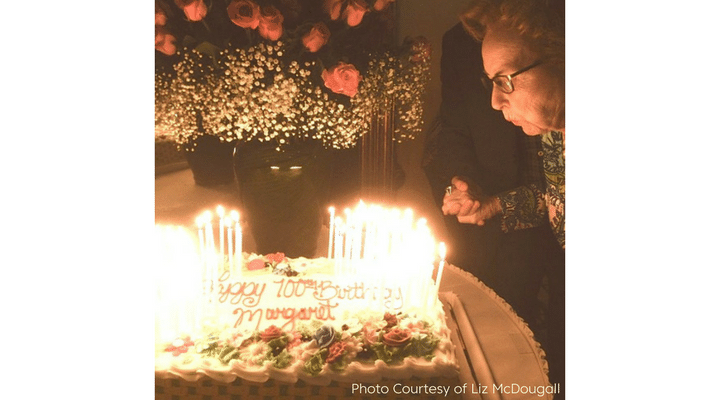 My grandmother, Margaret, blowing out her 100 birthday candles. Photo courtesy of Liz McDougall.

Silence is Your Friend

It’s tempting to throw your subject a lifeline when he or she draws a blank in response to one of your questions. But I’ve found that in these instances, making room for silence more often than not leads to a rich or illuminating detail. Many people, especially older subjects, just need a moment or two to access a memory.

Case in point: Several years ago, I sat down to interview my 100-year-old grandmother during our family gathering for her centennial birthday bash. I was certain that over the past three decades, I’d heard every childhood story she had to share, so my goal was just to record a few of her “greatest hits” on audio.

I asked my grandmother, “What’s one of the earliest memories you have?” Her initial response was that she wouldn’t be able to think of one. But rather than quickly move on to my next question, I let her ponder the request for a while. After about 10 seconds, she spoke up: “I can remember being on a train with my folks when we found out that the president was dead.” A few follow-up questions revealed that my then 6-year-old grandmother and her parents were traveling by train to a lake when word spread amongst their fellow passengers that President Warren G. Harding had died. It was the first time I’d ever heard the memory from my grandmother. What a delight!

Don’t Get Lost in Time

When your interview subject gets rolling with a stream of rapid-fire memories, it’s easy to get swept along and forget to orient those memories in time. Later, when you turn to your notes to start writing, you realize that you have no clue when the stories you jotted down took place.

Dates are important trail markers for any personal narrative. Although interrupting your subject’s story to ask, “now, what year was this?” might seem rude, without dates, a person’s life story quickly becomes a jumble of disconnected memories and anecdotes. 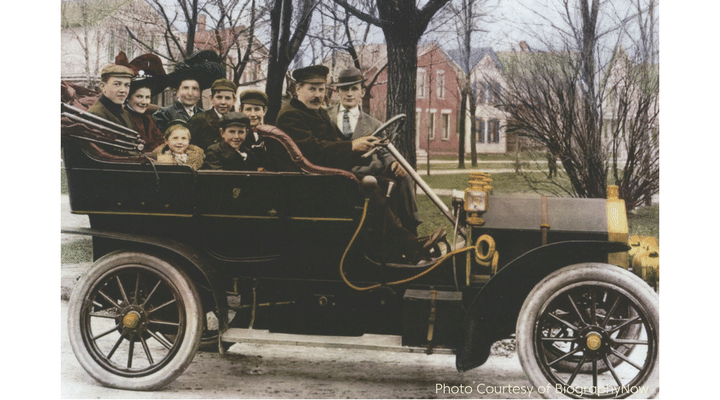 A BiographyNOW client I worked with believed, but was not certain, that her great-grandfather (driver in photo) was the first person in Fort Wayne, IN to own an automobile. What a shame it would have been to have lost that interesting detail for fear of inaccuracy! Photo courtesy of BiographyNOW.

Not Just the Facts, Ma’am

Family history is subjective. While some documentation exists (e.g., marriage certificates, real estate records, newspaper articles), most family stories exist solely in oral form. As such, when family members stop sharing a story, it’s lost to history. That’s why I believe that family lore and hearsay are just as important to document as known facts. Oftentimes, someone I’m interviewing has a story about a family member who’s no longer living, but hesitates to share it with me because the facts might be wrong. My response to the concern? “Please, do tell!”

It’s easy enough for me to indicate within the narrative that a detail from the past may or may not be accurate. For example, if my subject heard growing up that her great-great-grandmother was wanted for robbery in Ireland, I’d simply preface that particular information with: “The family believes that. . .” or “the family story goes that. . .” 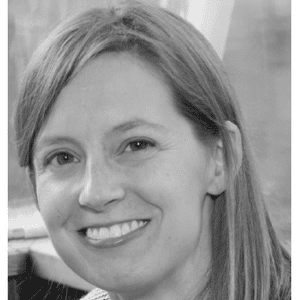 BiographyNOW takes memories like the ones mentioned above and puts them into professionally written, hard cover books that include photos and historical references. 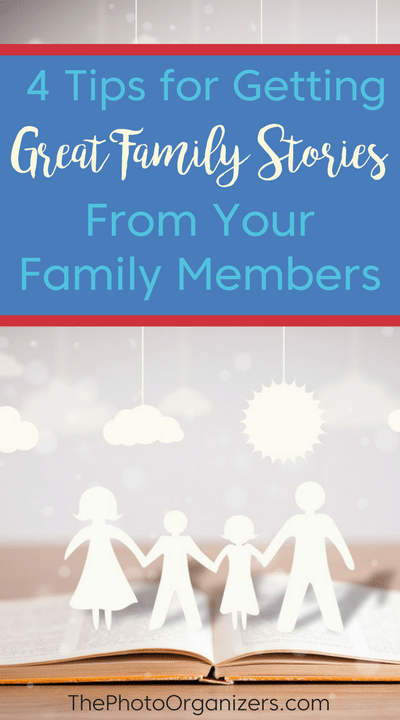