Get “REEL” About Your Home Movie Legacy Before It’s Too Late, Part I

Everyday I see the relief on my clients’ faces when they walk into my studio with their shoeboxes full of films. The stories are more similar than they are different. They tell me that these films were shot by their grandfather, aunt and uncle, or parents. They’ve been thinking about scanning them for a long time. Some of them had them converted once before to VHS or DVD, and they were disappointed with the quality. They tell me these films are important to them and ask me if I can help.

The fact is we should be worried about our home movies. Most of us want to do something with our growing and aging collection of film and tapes, but we simply don’t know where to begin. We are in a digital dilemma about our growing personal libraries, and it can be a daunting task to digitize, organize, and share the material, given our rapidly changing technology. We’re worried about spending money to put our home movies on yet another format that we won’t be able to play back in the future. So we hold off. We lack the motivation or call to action to do something  – until we have to! 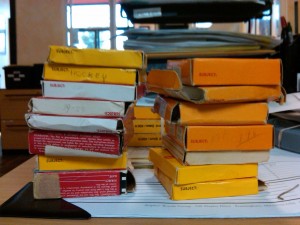 GET  “REEL” About Your Home Movie Legacy Before It’s Too Late!

Now more than ever technology gives analog material new opportunities!  Because there is so much to cover, I’ll break this into 2 parts.  In Part 1, we’ll cover some important things to consider when you are having your old movies converted.  In Part 2, which will run next week, we’ll talk about some of the fun things you can do with those movies once you have them in a format you can view.

Vision:  First things first though…before you have those old movies converted, take the time to think about what your vision is for your project! Do you want to just see it, share it, edit it, sell it as stock footage, have it on the Internet, or use it as genealogy research? This will dictate the type of workflow and playback chosen.  Make sure you work with a professional who understands your needs.

Preservation: There are 3,600 still images on a 50-foot reel of super 8 film! They are part of our family assets, and help our legacy live for future generations. The original material needs to be protected and preserved with integrity, and should only by handled by people trained in working with original material on equipment designed specifically for digitizing media. Make sure the handler has experience is assessing the condition of the film and is working with equipment that will not further damage the material.

“Reelizing” What You Have: I have found that families have everything from one type of film, to many different film and video formats. Here is a list of the most common and the approximate years the format was released. 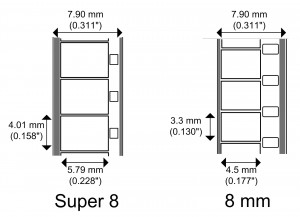 Super 8 and 8mm film formats side by side. Magnetic sound stripes are indicated in gray; the wide stripe is the actual sound track, the narrow stripe is a “balance” stripe, enabling smooth movement and rolling-up of the film.

Understanding Common Film Problems: Here are a few things you can do to see if the film reels are in trouble. If they are, get these scanned ASAP!

Scanning Equipment: Investigate how the work is being done and by who. This is the single most important tip I can give you!  There are so many places that now offer transfers, often on very primitive equipment. These are usually modified projectors that can compromise the integrity of the film. You only have one archive!  Hundreds of reels are destroyed every year. Would you go to www.heartransplantsrus.com if you needed a new heart?

No Spoilers: Some of you want to see what you have before you scan it.  It can be difficult to get access to good projectors and tape players. Additionally, each time you project aging film, it runs the risk of being scratched or damaged. The perforations of the film shrink over time and often do not line up in the projector properly. Our recommendation is to scan everything (except commercially produced films).  Because you are dealing with original material, there are generally no copies, and it is worth it to have a back up. I have seen Mother Nature or fire destroy entire film and video libraries and if there was no back up, it is a devastating loss. Sometimes there is a single golden nugget on the reel that makes it a compelling part of the library.

Money Matters:  Unfortunately budget usually comes into play.  As in most things in life, you get what you pay for, and there are lots of places that transfer film very low quality, very inexpensively, and compromise the integrity of the material. Some Big Box stores send it out of the country and do it factory style. Is it worth it to you to have your films and tapes scanned to the same quality as the original material – or even improved? Consider doing a little at a time.  Set a time line. Increasingly, I see people scan one roll best quality, put it on the internet for family members to see and use a Crowd Funding Website such as www.kickstarter.com to get family members to help pay for the project. Seeing that one roll really gets people excited and they can donate directly to the project on line!

The Home Movie Transformation: There are now so many options for getting film and tape moved to digital that is has become very confusing. You, as a consumer, should mimic what the studios are doing with their films so that the material can be seen at its highest quality and repurposed in many ways. The best workflow means to have the film transferred in high definition (1080), not standard definition. This more closely matches the original resolution of the film and looks fantastic projected digitally on our modern flat screen TV’s. Film can be color corrected (like Photoshop for your film) where needed to fix fading and inconsistent lighting conditions. Material that is encoded and put on a hard drive is ready to edit, upload, and watch on a computer, smart phone or iPad. You cannot easily edit a DVD. A DVD is just a lower quality copy of your original material.

Get Your Home Movie Library Encoded on a Hard Drive: One of the things I love most about having a home movie library encoded on a hard drive is that each reel or tape shows up as it’s own file when you plug it into your computer. You can name the files. Your entire media library is all in the same format, so the possibilities “ to do something” with the material are endless. You can then organize these into  “play lists” chronologically, or as projects, such as just weddings or just holidays!

The challenges we have for film and video are the same as for still images. It can be difficult to organize, digitize and migrate your home movie material into a modern workflow.  However, the effort is well worth it when you consider how precious your old home movies are to your family’s legacy!

Rhonda Vigeant is Director of Marketing at Pro8mm in Burbank, CA

and has worked with home movies and legacy footage for 30 years. She is a member of Appo, the Association of Personal Photo Organizers, and is  passionate about helping you create your family legacy.  She is also the author of the soon to be released book  GET REEL ABOUT YOUR HOME MOVIE LEGACY BEFORE IT’s TOO LATE!