Home Movies Are Like a Box of Chocolates…You Never Know What You Are Going To Get!

Film expert Rhonda Vigeant of Pro8mm wants us to uncover the sweet surprises in our home movies. Use clues to discover what you have and enjoy the final product. 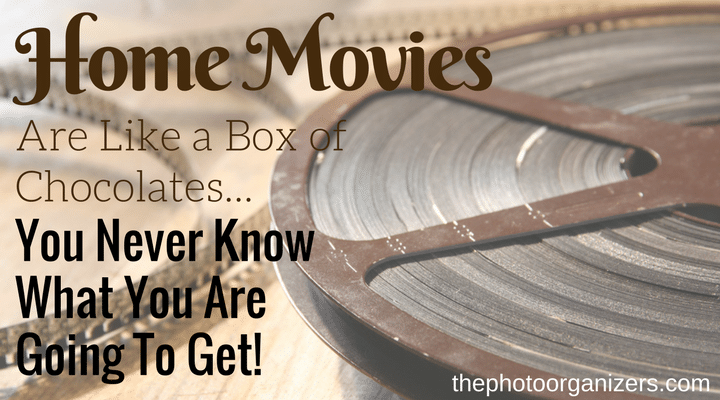 I am one of those people who loves movie quotes. Our family can carry on entire conversations in “movie speak.”  While some of this is kind of silly, and just for fun, many movie quotes hold a deeper meaning that can be applied to life, both practically and philosophically. Those are the quotes I like the most.

One of my favorites is from the movie Forrest Gump. Tom Hanks’ character speaks of his Mama (Sally Fields) when he endearingly recalls, “Mama always said, Life Is Like A Box of Chocolates, You never know what you’re going to get.” To me, that is not only a beautiful metaphor, but also it really does apply to our reels of old home movies.

If you are like many of us, those home movies are sitting in a shoebox somewhere in your home, collecting dust. You might have even pulled them out a couple of times, feeling a responsibility to curate the contents, but often there is a lack the emotional connection to the material because we can’t see the image like we can with a photo.  We have difficulty in mustering up that sense of urgency to get them scanned and bring them into our digital life – until we HAVE to for a memorial or milestone family event. We don’t have a game plan about how to budget for it, transfer it, edit it, share it in a way that that will move the project from “TO DO” to “TA DA!”

Have you ever opened a box of chocolates and said to yourself “I just don’t know which one to pick, so forget it, I won’t have one.”  No, of course not!  We look for clues as to what might me the one we are looking for and we take a chance.  Even if we didn’t pick the one we thought was the vanilla cream, we took a chance and probably still enjoyed it!

[bctt tweet=”Home movies are like a box of chocolates…you never know what you are going to get!” username=”photoorganizers”]

Look For Clues About Your Home Movies

Many people want to find a specific reel in their archive, such as a wedding, or milestone event. If they can’t find a reel marked with the particular event they want to see, they get stuck.

Just like a box of chocolates, we can look at the sampling of reels for clues. We might pull a few out and look at the any notes that were written on the boxes trying to make sense of the content.  We use our nose to get clues about the condition of the film. We might notice a strong smell of vinegar or white chalky mold, which would indicate that the reels are starting to decay or got wet. We think about putting the box away, as procrastination seems like an easier game plan, but that little voice inside of us tells us to get “reel” about our home movie legacy before it’s too late!

So we take another look. Just like you might be trying to figure out which is the caramel cream and which is the truffle, you can use your senses and your intuition to make an educated guess about what is on those film reels. You can collect a lot of information from what you can see right on the boxes. If you really dissect it element by element, do a little research, use your imagination, intuition and things you already know about your family, dig a little and you will learn a lot!

Think Outside the Film Box

Here are some things to look for that will help you to think “OUTSIDE THE BOX” regarding the content of your home movies.

Look at the film manufacturer

It could say any one of a number of things.  Is it Kodachrome, Agfa Moviechrome, Ansco, or Fujichrome? This will give you some information that could be useful as to what year that stock was available, what country it was from and when it was shot. You can check on Wikipedia which has a great list of all the different types of home movie film stocks and the years they were on the market.

Look at the film type and length

The film box will indicate a film type (black and white, or color) and how many feet are on each reel.  Film was only sold on 50-foot reels, (or 25 feet reels where you shot both sides of the film that were split during the processing and returned as a 50 foot developed reel). Knowing how much footage you have will help you set a budget.  Professional transfer houses will charge by the foot. Printed on the box might say 8mm, Double Super 8, Regular 8, Normal 8, Super 8, Super8 Sound.

If the film is not in a box, and only on a reel, here is a guide that can help.

[bctt tweet=”Your film box or reel can help you solve the mysteries of your old home movies.” username=”photoorganizers”]

Look at the Expiration Date

Some reels have a date stamped on the boxes when to develop by. This will give you a clue as to when the film was shot. 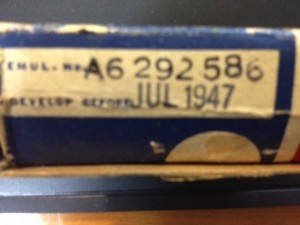 Look at the expiration date.

Look at the Return Address

Old reels of film were usually processed through the mail.  Look at who the box was “from” will tell you who mailed the film to the lab and what address they lived. 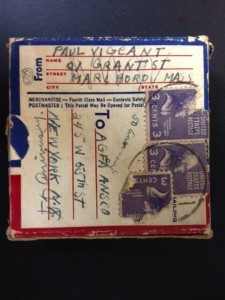 Look at the sender, the recipient, and the postage.

Look at the Recipient

You will see on the box which lab it was sent to. Sometimes you might be surprised that it was sent out of state or out of the country!

Look at the Stamps and postmark

How much postage is on the box?  Can you see the date and place of the postmark? Even it if is not clear to the eye (or with your magnifying glass) you can use this great resource to help you discover the date the film was mailed to the lab. 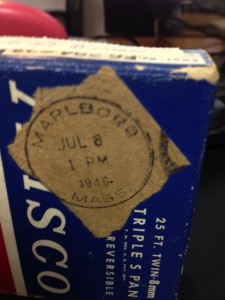 Look at the postmark, the brand of film, the type and how much footage.

Look at the Handwriting

Do you recognize whose writing is on the box? This is one of my favorite things to look at on a box of home movies. Penmanship is one of the most personal and individual traits our ancestors can give us! 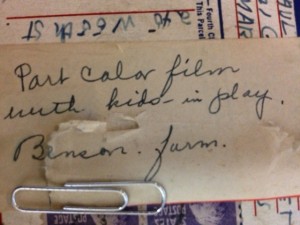 Do you recognize the handwriting?

Look at Any Notes

You will be surprised as to what a fantastic job your family did of giving you a clue as to what is on the reel by what they wrote on the box.  Generally, the highlights are noted. I have seen everything from Labor Day Parade – 1946, to kids in a snowstorm; the big fight; “the producer”; Christmas 1955; summer vacation at the lake house; the “three rambling roses.” You name it, I’ve seen it. They are telling you the highlights of the reel. And even if the film was put back in the wrong box (as is sometimes the case), you know that somewhere in your archive there is probably a film that matches the indicated subject.

Look at what notes are written on the box.

Some families have gone much further with writing notes or on index cards with information about each reel. I have seen logs that number the reels and describe the content. While this is fabulous information, sometimes just the few notes on the box are enough to peak your interest. This will hopefully get you motivated (before it’s too late) to have the reels scanned and create a modern digital master to a hard drive that you can edit on your home computer and share on your social networking sites.

What else can you guess? Who might be in the film based on all the clues you have? Who shot it? What might have that day been like? Aren’t you excited to see?

Your home movies are original material. They are your masters and anytime you make a copy it should be done from the master to get the absolute best quality and resolution.  I recommend that only a professional company who can evaluate the condition and integrity of the film, and does not transfer it on a projector-based system handle your film library. Only a professional film scanner (the same type used in the movie industry) can truly protect your home movie library and produce a high definition digital copy. 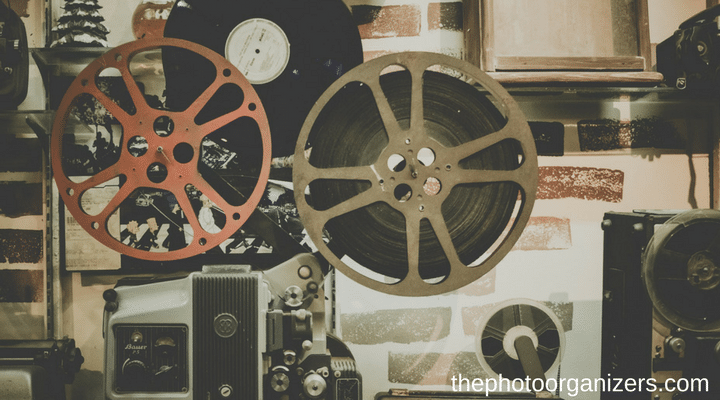 Taking the Next Steps

Set a budget that is comfortable to you.  Do as much at a time as your budget allows, but keep the project moving!  Families can get really excited by “installments” where they get a bit of the transfer over time, shared on a private YouTube channel or flash drive. After they have seen a few reels, ask them to jump in and help with the cost! This is a great way to get the next generation involved.  Make a plan to take oral histories from the family members who know who is who on the films.  That information is usually lost forever when the oldest family member passes on.

The last bit of advice I want to share is that many people want to look at all their film before they transfer it and only transfer reels that are “interesting” First of all, this puts the film at risk in many cases.  The film might be brittle.  It can shrink as it ages, so the perfs do not line up the way they once did.  The projectors themselves are often not in good condition.  The belts are often worn.  The light bulbs are often not the correct ones and get too hot and can burn a hole in the film.  Film can easily get scratched if there are any artifacts on it, or glue from old splices or brittle leader.  It is much better to transfer everything, and enjoy the sweet surprise of biting into the chocolate and savoring the flavor.

When we do finally get to see our new digital master and watch the reels all the way through we really can see the parallel of this idea that you never know what you are going to get! Our home movies are filled with all kinds of sweet surprises that will make you feel like a kid in a candy store. You just can’t get enough! 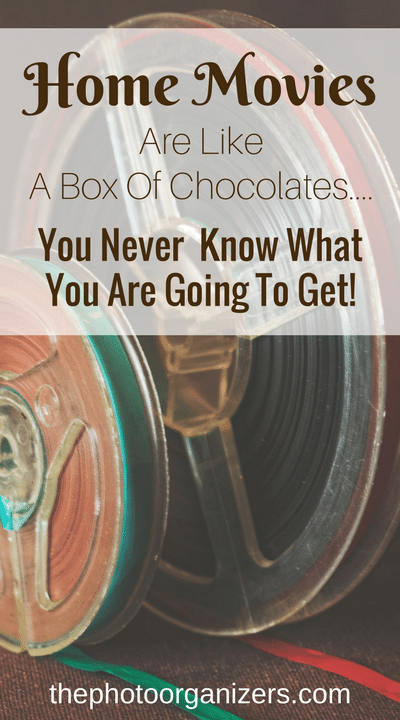 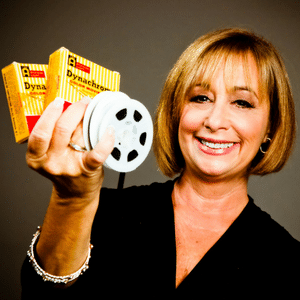 Rhonda Vigeant is the Director of Marketing at Pro8mm, Burbank, CA. She is author of Get ‘REEL’ About Your Home Movie Legacy: Before It’s Too Late!  Pro8mm has transferred millions of feet of legacy footage for the words most famous faces and places, for personal use, museums, and documentaries. For more information or for any questions about transferring your film legacy, email Rhonda@pro8mm.com.