Don’t let your home movies stay trapped. Jens Peterson of Everpresent is back to help us navigate the world of standard and rare video formats. 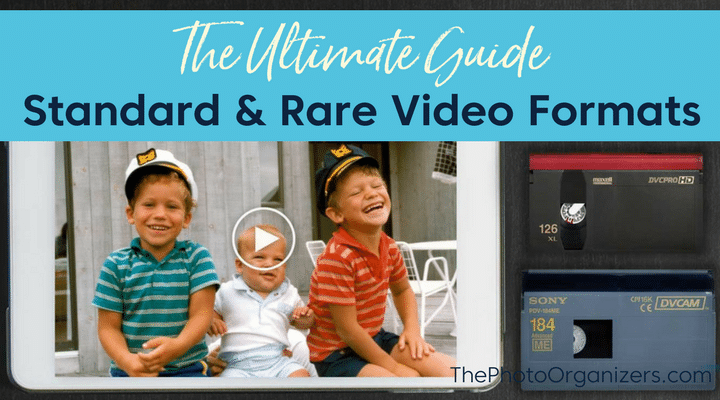 It’s good to be back on the APPO blog to focus on video formats! Home movies can be more dynamic than still photos, so they’re a fun way for you and your clients to relive the moments they capture.

The term ‘home movies’ probably makes you think of VHS tapes or 8mm film reels, but there’s a huge range of video formats beyond that. Learn how to tell them apart can help you sort, preserve, and enjoy these items again.

Video Formats You See the Most

Home movies started on celluloid film rolls that capture pictures when exposed to light. Perforations called sprocket holes allow the film to be fed through projectors. It has a grainy effect that some people prefer to crystal-clear video. Chemicals in the film can make it deteriorate, however, especially in direct sunlight and high temperatures. It’s also vulnerable to mold and a smelly type of breakdown called ‘vinegar syndrome.’

The standard 8mm format was the most common for homemade films. These are mostly silent, but some film has a thin metal strip along one edge to store audio. When you think about rare film formats, it helps to know how they differ from the 8mm standard. Here are the formats you should know. 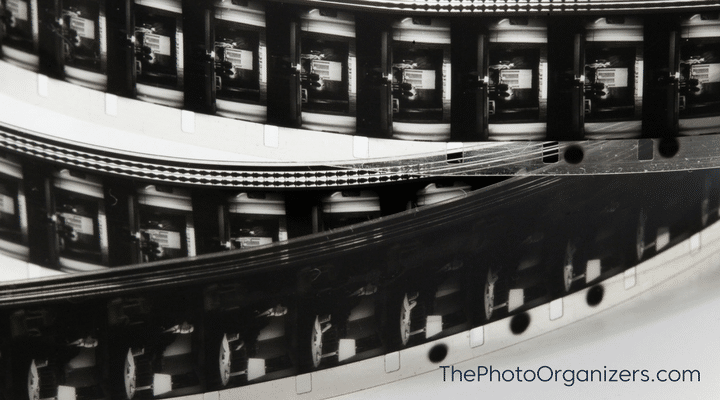 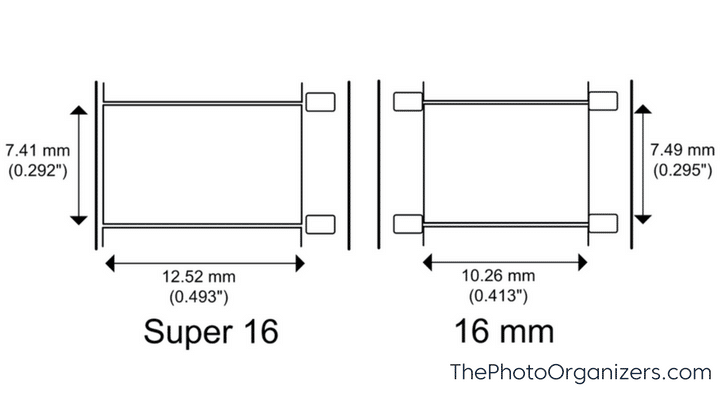 The 16mm format came as a cheaper, consumer-friendly alternative to the 35mm gauge used by professionals. It used safety film, which was less flammable than the nitrate film that once ruled the film industry. 16mm film was also more affordable to develop. A variation called the Super 16 allows for a larger image because the sprocket holes are left off of one side. 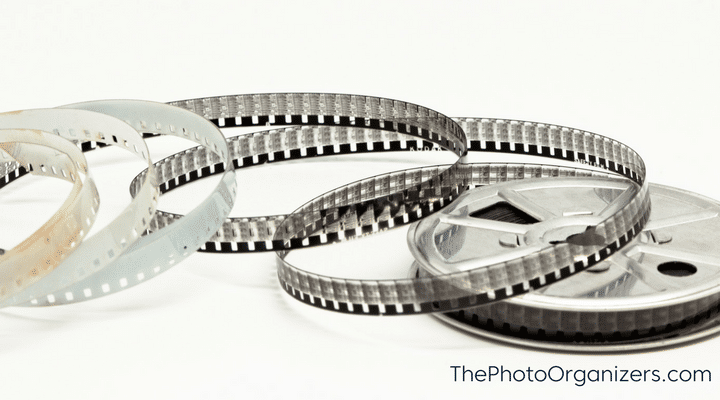 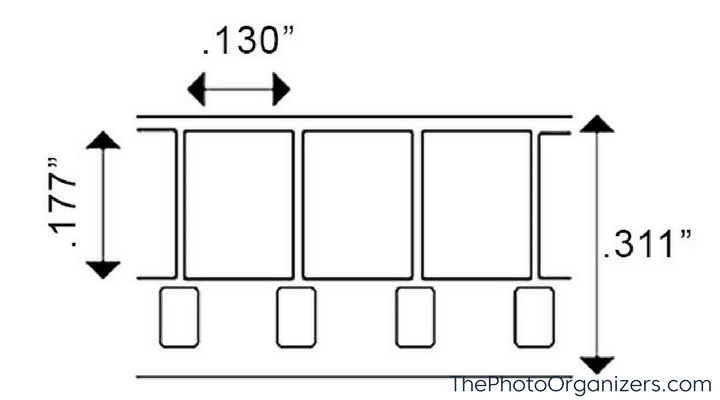 Standard 8mm film was a more affordable, popular alternative to the 16mm norm. It’s sometimes called ‘Double8,’ because it’s really just 16mm film with a separate recording on each half. This two-sided split means the normal 25-foot length can actually hold 50 feet of video. Standard 8mm film was mostly discontinued in the 1990s. Visit this page to learn more about standard 8mm film. 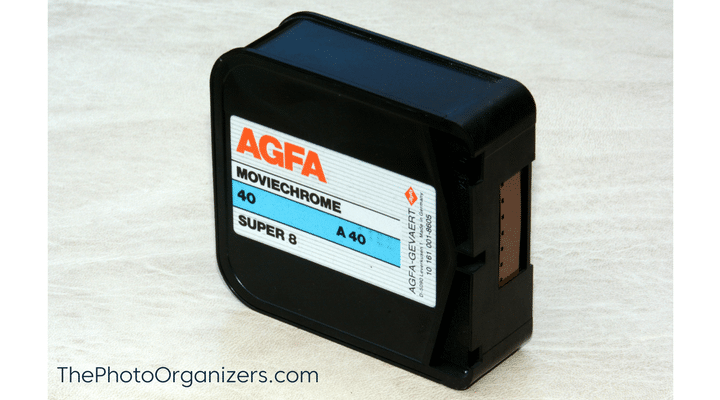 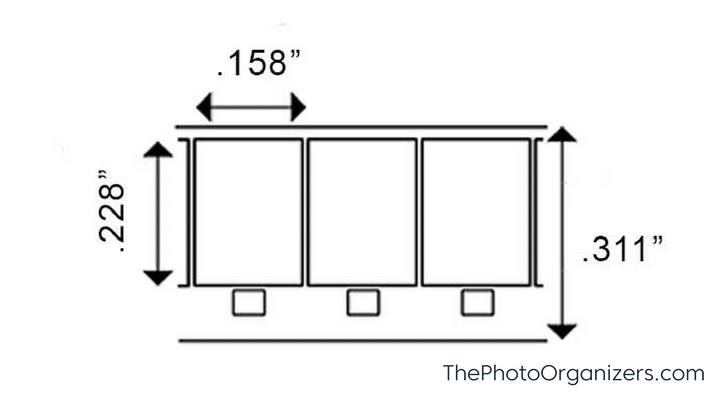 Super8 film comes in cartridges that are easy to load into cameras. Just like the Super 16 format, the Super8 has smaller sprocket holes than the standard 8mm. The extra space allows a larger image size and a magnetic audio strip. It was a popular home video medium until roughly 1980. Some commercial films were also sold on this format. Get more fun facts about Super8 film by clicking here.

[bctt tweet=”Not sure what kind of film your home movies are in? Check out this ultimate guide. @everpresent_inc” username=”photoorganizers”] 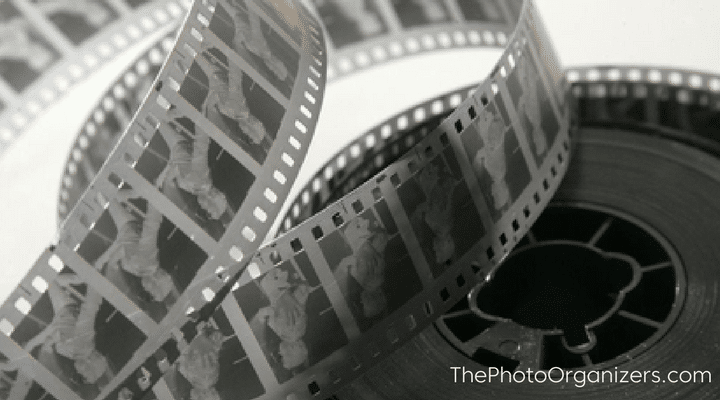 35mm film was created for Thomas Edison’s motion picture camera. The format became the international standard for film in 1909. It was popular with filmmakers, but the developing process was too costly for most families. The film was first made with a flammable chemical that would catch fire if handled improperly. Combustible nitrate film was phased out in the 1950s. 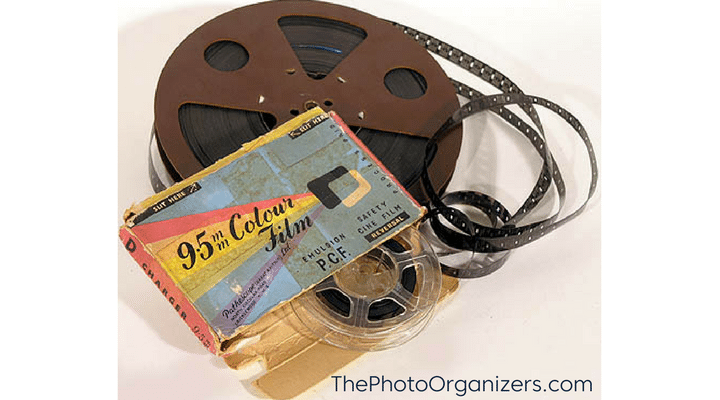 The 9.5mm format was designed to copy commercial films for personal use. It’s recorded as three separate runs of film on a single 35mm film loop. 9.5mm recordings were highly popular in Europe, but not so much in the United States. 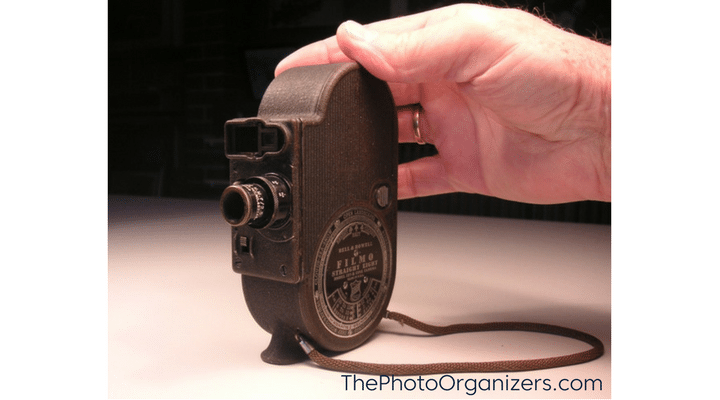 Single-width 8mm film was first released with a Bell & Howell camera called the Filmo Straight Eight. This format is actually 8mm wide, unlike the standard 8mm or ‘Double8’ format that comes on two sides of 16mm film. Straight Eight film was not as popular as the standard 8mm, but it did return as a cartridge format in the 1950s for the Bolsey 8 camera. 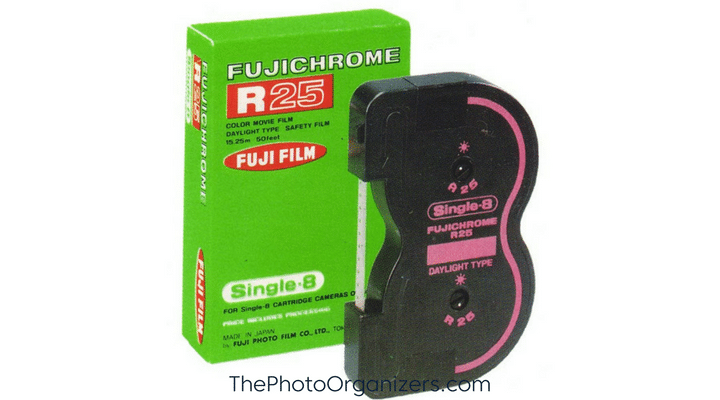 For the Single8 format, unexposed 8mm film is kept in a cartridge. The film is gradually pulled from the cartridge and through a camera when recording. Single8 was more popular in Japan than the U.S., where most people preferred the Super8. This home movie format was discontinued in 2012. 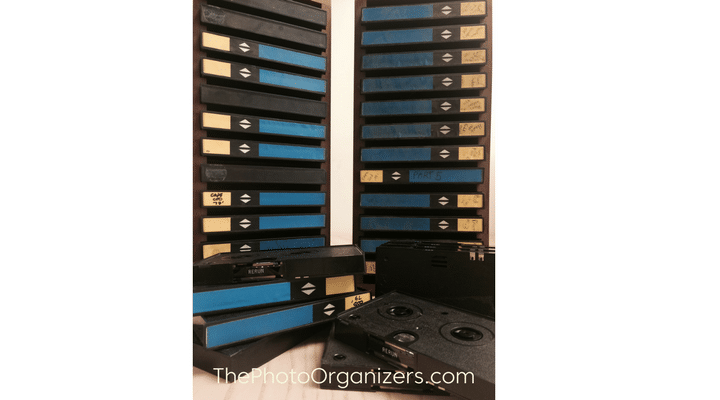 Polavision is another cartridge format. Just like your white-bordered Polaroid photos, this film self-develops using a chemical process. Polavision’s image quality is so poor that it was discontinued in 1979, as VHS and Beta tapes outperformed it. To digitize Polavision, the film needs to be taken out of the cartridge and put onto reels.

Video tape formats use magnetic tape to store audio and video data. Some formats leave the tape out in the open, but the more successful models store the tape inside of cartridges called cassettes. Many cassette formats have variations with different sizes and run times. Media professionals started taping in the 1950s, but videotape did not reach consumers until the ‘60s.

Home video’s popularity started fierce competition between tape makers. The biggest conflict was the videotape format war of the 1970s. JVC’s VHS tape won that war, beating Sony’s Betamax to become the most common video tape format. Here’s more on the VHS and some of the rare formats that surround it. 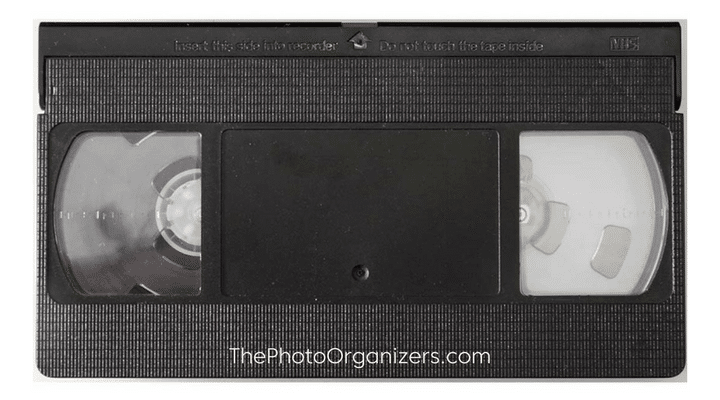 VHS tapes beat Sony Betamax in the format war to become the standard video tape format. The VHS offered longer recordings at a lower price, and this trumped Sony’s claim that Betamax was a better quality product. VHS was also compatible with VCRs, which were popular with consumers and could record television shows. Despite the format’s dominance, VHS cassettes use magnetic tape that deteriorates quickly. 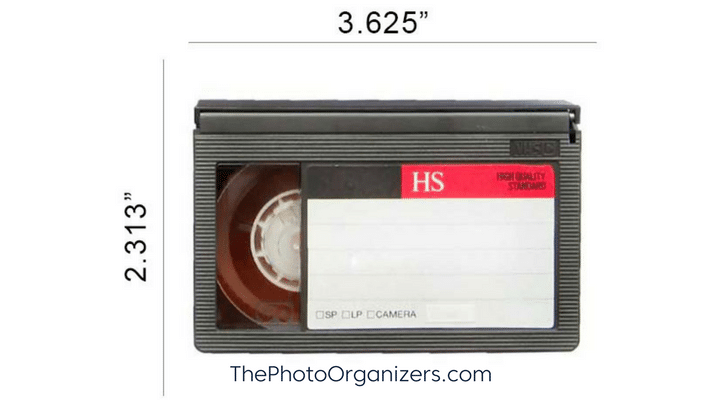 The VHS-c format is just a smaller version of the VHS tape: the ‘c’ stands for ‘compact.’ These tiny cassettes fit portable camcorders, as well as full-sized VHS adaptors for playback in VCRs. The tapes’ quality was outshined by the competing Video8 format, but their compatibility with VCRs made them more popular. They do use the same magnetic tape as standard VHS cassettes, so they’re just as likely to wear out. The tape is vulnerable to mold, and sometimes it comes loose inside of the cassette. Visit us here to read up on our VHS-c conversion process. 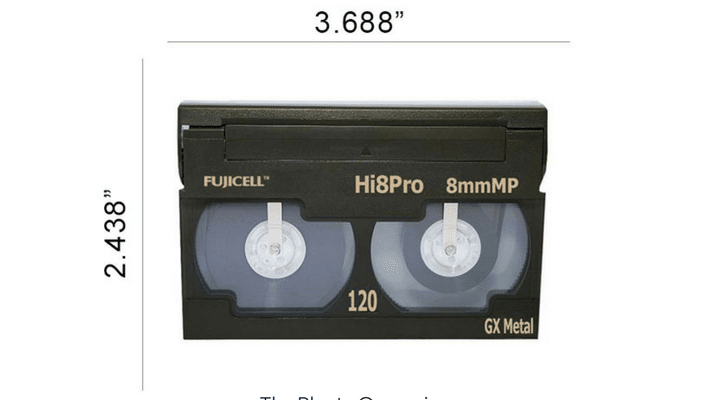 Sony also started a line of 8mm cassette tapes in the 1980s. The first 8mm tape format was Video8. It was completely analog and later replaced by the Hi8 format. Hi8 tapes offered better quality and longer playback times than their VHS-c competitor.

Digital8 is the latest 8mm tape format. These tapes store digital info that usually transfers to DVD with high quality. Hi8 and Digital8 tapes look identical, but it’s easy to tell them apart because the format is noted on the cassette. 8mm tape formats only have a 15-year shelf life, and 8mm decks are not affordable. However, you can watch these tapes on an 8mm camcorder and even connect that camera to a television. 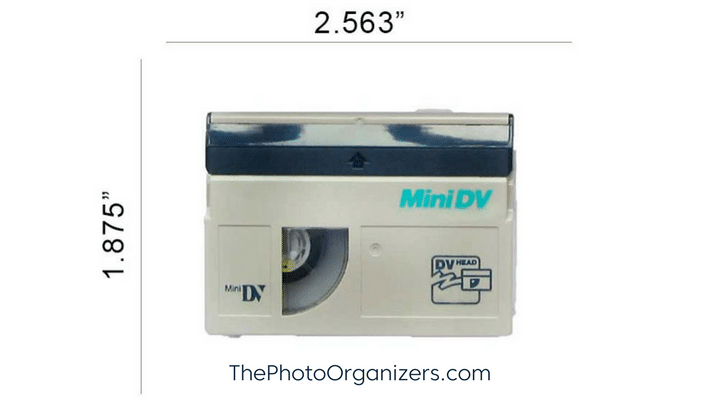 MiniDV was the last video cassette format before memory cards hit stores. MiniDV tapes look just like small VHS tapes. The ‘DV’ in the name stands for ‘digital video,’ which is a format created in the ‘90s by a joint effort between several tape makers.

The tapes’ high quality and small size made them briefly popular. The data stored on these tapes is technically digital, but it’s still stored on tapes and run through the same tape transfer process to convert it to a digital file. MiniDVs are vulnerable to digital corruption, a permanent problem that distorts video and audio recordings. 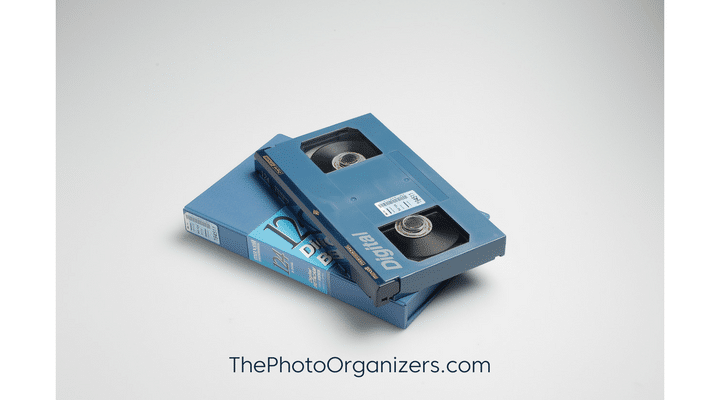 In case you couldn’t tell by the name, DigiBeta tapes are Beta formats that store digital data. They replaced Sony Betacam and Betacam SP during a shift to digital formats in the 1990s. The Digimax and Digicam tapes look very similar, but Digimax cassettes are easy to spot because they’re usually light blue. The larger ‘L-size’ DigiBeta holds more video than the smaller ‘S-size.’ 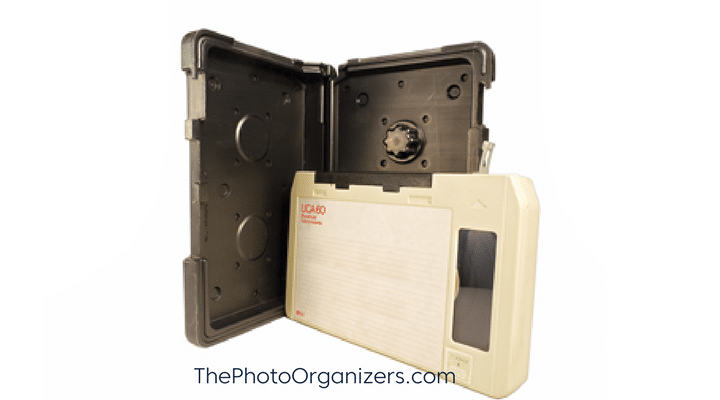 The U-matic is a cassette format. These tapes never caught on with consumers because U-matic VCRs were so expensive. But schools and businesses could afford them, and the format became popular with broadcast journalists. U-matic tapes were often damaged by friction when paused inside of a VCR.

We try to be thorough, but there’s a smattering of rare formats we still haven’t covered. Some movies are stored on disc formats like LaserDisc. Another one called the V-Cord has a clunky cassette that resembles an 8-track audio recording. Some tapes from outside of the U.S. are recorded in a format called PAL, which is not compatible with American gear that uses the NTSC standard.

Some of these less common formats are extremely hard to preserve, because it’s nearly impossible to find the recording and playback technology that works with them. If you’re curious about an item that wasn’t covered in this guide, you can click here for an exhaustive list of forgotten video formats. 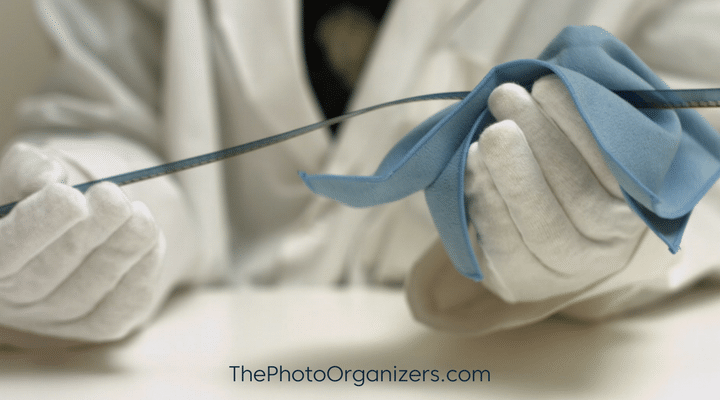 What to Do With the Family Videos and Home Movie Films

Your home movies are a priceless way to travel back in time. Still, older technology keeps getting phased out. Even VCRs were discontinued in 2016, so you’re running out of ways to enjoy these vintage formats. The tapes and chemicals in your reels and cassettes won’t last forever, but your memories can! Follow these tips to preserve and protect your collection for as long as you can.

So many rare video formats were born out of competition and innovation. Those forces are still at work, and we may have to add some newer media to the list soon. In the meantime, if you’re still thirsting for home movie knowledge, visit us here for an in-depth look at the different kinds of videos out there. 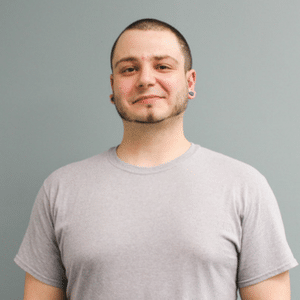 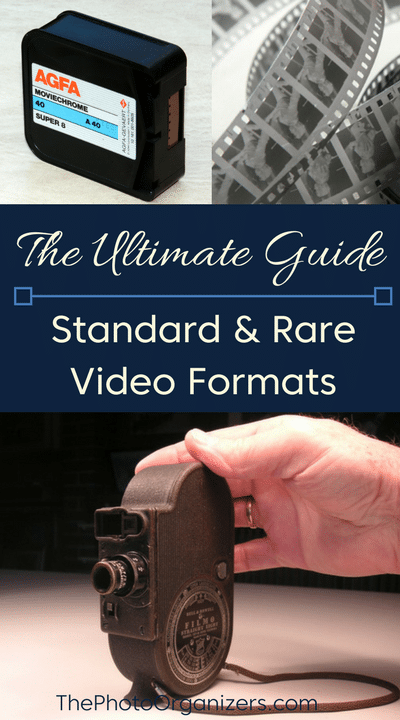