Sending a Son off to College A week before we were to fly 3000 miles away, to drop our first child off at college, my husband was running around in a sudden panic.   He was frantically searching for an old tin Sucrets box that had various size sewing needles and thread in it.  We had moved that rusty tin box many times and it languished in the medicine cabinet since no one in our house was ever seen sewing on a button or using a needle and thread.    “My mom gave that to me when I went to college and I want to give it to Joshua. I am going to include a picture of his grandmother and a note, I know he’ll never use it but if he just keeps it in his drawer it might bring him comfort.”   Hmmm,  I thought, this from the father who all year would roll his eyes at me when I would reflect on how quiet the house would be once Joshua left.  He liked to say, “there comes a time when a son needs to be out on his own.”  Meanwhile I had been spending the past year, walking by Joshua, sprawled out on the couch watching Sport Channel thinking, when did this young man with a five o’clock shadow appear and what happened to my cute, snuggly dark headed boy? 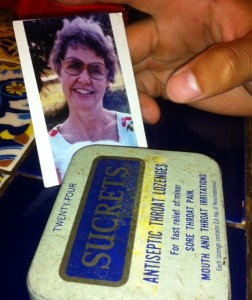 At that moment, I knew that my husband was going to miss his son, a lot!  And he had something personal to pass on.  Not a photo album like the one I would make but something of great value nonetheless.    As photo organizers, we frequently write and teach about the importance of preserving your family memories through photos and home movies.  However, you probably have other items with sentimental value that you don’t want to overlook.  I am sure Joshua’s grandmother, whom he never met, had no idea that the little box she packed so lovingly with needles and thread over 30 years ago would be passed onto her grandson. Yet here was her son, doing the something she had, filling a small, tin box not just with a needle and thread but thoughtfulness and love.  What items do you have in your home that you can pass on to the next generation?

In 2009, Cathi had her “light bulb” moment when she recognized that consumers were becoming increasingly overwhelmed with the exploding number of photos, media and memorabilia they were accumulating. She created APPO to support a new and emerging profession of photo managers by providing training, support and collaboration for people interested in adding photo management services to their existing business or as a new business. She is also a mom of two teens, and an avid amateur photographer and storyteller. She has a deep passion for helping people tell their family stories through their photographs.